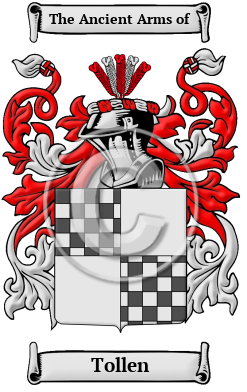 The surname Tollen is derived from the German word toll, which means wild, crazy, and is often used to describe pranks and tricks. The original bearer of the name was known for pulling extensive, crazy practical jokes. A broad and miscellaneous class of surnames, nickname surnames could refer either directly or indirectly to a characteristic of the first person who used the name. They can describe the bearer's favored style of clothing, appearance, habits, or character. Nickname surnames were frequently the result of a spontaneous reaction to a particular occasion or event.

Early Origins of the Tollen family

The surname Tollen was first found in Pomerania and Mecklenburg, where the name emerged in mediaeval times as one of the notable families of the region. From the 13th century the surname was identified with the great social and economic evolution which made this territory a landmark contributor to the development of the nation. Chronicles first mention Herbord Tolle of Luebeck in 1325, and Johann Toelner of Rostock in 1345.

Early History of the Tollen family

Prominent bearers of the name Tollen at this time were Heinrich Anton von Toll, who became captain of the Prussian regiment from Wedell in 1770, and died in 1805 as a major while fighting in...
Another 35 words (2 lines of text) are included under the topic Early Tollen Notables in all our PDF Extended History products and printed products wherever possible.

Migration of the Tollen family