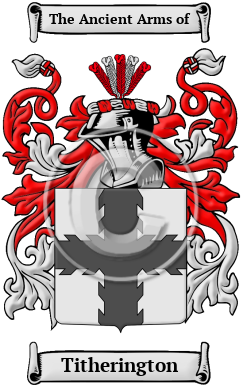 Early Origins of the Titherington family

The surname Titherington was first found in Cheshire at Titherington, a township in the parish of Prestbury. [1]

It is generally thought the place name dates back to the Domesday Book for Wiltshire where it was listed as Tidrentune. By the 13th and 14th centyury, the township was also known as Tyderinton and Tyderington. [2]

One of the first record of the family was Jordan de Tyderinton who was listed here in 1250. Later in Yorkshire, William de Tyveryngton was listed as a Freeman of York, 11 Edward II (during the eleventh year of King Edward II's reign.) and later, John de Tyderynton was vicar of Sandback in 1356. [1]

Early History of the Titherington family

This web page shows only a small excerpt of our Titherington research. Another 83 words (6 lines of text) covering the years 1536, 1455 and 1487 are included under the topic Early Titherington History in all our PDF Extended History products and printed products wherever possible.

More information is included under the topic Early Titherington Notables in all our PDF Extended History products and printed products wherever possible.

Migration of the Titherington family