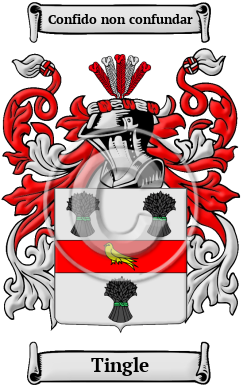 The name Tingle, like many surnames, is occupational in origin, referring to the job that the first bearer did for a living. In this case, it is metonymic, coming not from the name of the occupation itself, but rather from the product made. A tingle is a very small nail, often used in the making of shoes. The first Tingle was most likely someone who made such nails.

Early Origins of the Tingle family

The surname Tingle was first found in Cambridgeshire, where the name first appeared in the early 13th century.

Early History of the Tingle family

Spelling variations of this family name include: Tingel, Tingle, Tyngil, Tyngyl, Tingler and many more.

Notables of this surname at this time include: Edward Tyng, British leading military officer in Maine and was appointed Governor of Acadia during King William's War, taken prisoner in the Naval battle off St. John (1691); and his son, Edward Tyng (1683-1755), a British naval officer, captain of the batteries and fortifications of Boston and in...
Another 55 words (4 lines of text) are included under the topic Early Tingle Notables in all our PDF Extended History products and printed products wherever possible.

In the United States, the name Tingle is the 6,833rd most popular surname with an estimated 4,974 people with that name. [1]

Tingle migration to the United States +

Tingle Settlers in United States in the 17th Century

Tingle Settlers in United States in the 19th Century

Motto: Confido non confundar
Motto Translation: I trust and shall not be confounded.