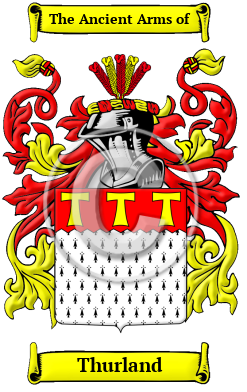 Early Origins of the Thurland family

The surname Thurland was first found in Nottinghamshire at Thurland Castle. The family name was first referenced in the year 1472 when Thomas Thurland of Lancashire held estates in Nottingham at Gainston. [1]

Early History of the Thurland family

Distinguished members of the family include Thomas Thurland, Lord Mayor of Nottingham (1442-1443); and Edward Thurland (1607-1683), an English lawyer and politician, Member of Parliament for Reigate in 1640 and 1659. Born at Reigate, Surrey, in 1606, he was the eldest son of Edward Thurland of Reigate...
Another 46 words (3 lines of text) are included under the topic Early Thurland Notables in all our PDF Extended History products and printed products wherever possible.

Thurland migration to the United States +

Thurland Settlers in United States in the 17th Century