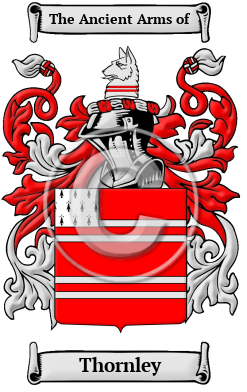 Early Origins of the Thornley family

The surname Thornley was first found in Durham at Thornley, a village near Peterlee that dates back to 1071-7080 when it was listed as Thornhlawa. The place name literally means "thorn-tree hill or mound" from the Old English words thorn + hlaw. [1] Another Thornley is found in the same county between Crook and Wolsingham, south of Tow Law and finally, Thornley-with-Wheatley is a civil parish in the Borough of Ribble Valley, Lancashire.

Early History of the Thornley family

This web page shows only a small excerpt of our Thornley research. Another 112 words (8 lines of text) covering the years 1510, 1600, 1535, 1455 and 1487 are included under the topic Early Thornley History in all our PDF Extended History products and printed products wherever possible.

Spelling variations of this family name include: Thornley, Thornleigh, Thornlea, Thornlie and others.

More information is included under the topic Early Thornley Notables in all our PDF Extended History products and printed products wherever possible.

In the United States, the name Thornley is the 16,315th most popular surname with an estimated 2,487 people with that name. [2]

Thornley migration to the United States +

Thornley Settlers in United States in the 17th Century

Thornley Settlers in United States in the 19th Century

Thornley Settlers in Australia in the 19th Century

Thornley Settlers in New Zealand in the 19th Century

Historic Events for the Thornley family +