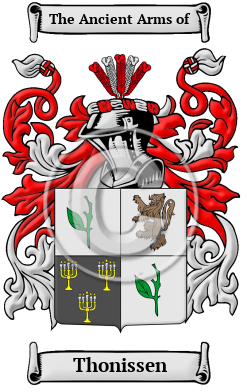 The German surname Thonissen originated as a short form of the Roman name Antonius (the English Anthony.) It is the name of two major Christian saints, St. Anthony (ca.250-350,) who was the father of Christian monasticism, and Anthony of Padua (1195-1231), the Franciscan monk, who became the patron saint of Padua and Portugal. In granting their children holy names, medieval parents sought to reaffirm their Christian beliefs and to secure protection from the namesake. The name Tönsing is a Low German diminutive of the name Antonius, and Tönnies is a short form, as in Tönnies Alberdes, recorded in Lippe in 1571. Other German variants include Don, Ton, Thon and Dohn. The surname Thonissen, thus, comes about as a patronymic, a surname derived from the personal name of the father.

Early Origins of the Thonissen family

The surname Thonissen was first found in Westphalia and the Lower Rhineland, where the name Thonissen emerged in medieval times as one of the notable families of the region. From the 13th century the surname was identified with the great social and economic evolution which made this territory a landmark contributor to the development of the nation.The earliest mentions of the surname are Heinz Ton, who was recorded in Immenstaad in 1423, and Johann Tonsing, who was recorded in the area of Osnabröck in 1649.

Early History of the Thonissen family

This web page shows only a small excerpt of our Thonissen research. Another 59 words (4 lines of text) are included under the topic Early Thonissen History in all our PDF Extended History products and printed products wherever possible.

More information is included under the topic Early Thonissen Notables in all our PDF Extended History products and printed products wherever possible.

Thonissen migration to the United States +

Thonissen Settlers in United States in the 17th Century