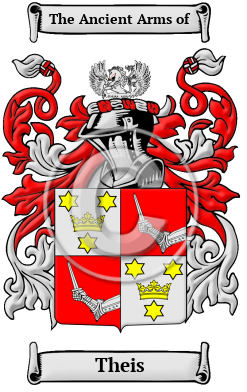 The name Theis derives from the German personal name Matthias which in turn derives from the apostle Matthaeus (English Matthew). Versions of this name were very popular in the Middle Ages throughout Christian Europe.

Early Origins of the Theis family

The surname Theis was first found in Germany, where the name came from humble beginnings but gained a significant reputation for its contribution to the emerging mediaeval society.

Early History of the Theis family

This web page shows only a small excerpt of our Theis research. Another 126 words (9 lines of text) covering the years 1295, 1596, 1790, 1804, and 1869 are included under the topic Early Theis History in all our PDF Extended History products and printed products wherever possible.

Spelling variations of this family name include: Theis, Theisen, Thein, Theitz, Theisz, Theisman and others.

More information is included under the topic Early Theis Notables in all our PDF Extended History products and printed products wherever possible.

In the United States, the name Theis is the 5,471st most popular surname with an estimated 4,974 people with that name. [1]

Theis migration to the United States +

Theis Settlers in United States in the 18th Century

Theis Settlers in United States in the 19th Century

Theis Settlers in New Zealand in the 19th Century