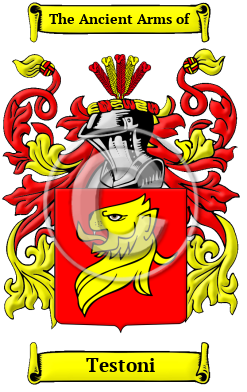 Early Origins of the Testoni family

The surname Testoni was first found in Italy. Bearers of Testoni have been found in almost every part of Italy, but in Emilia-Romagna and Tuscany in particular. The spelling variations of the name which end in "i" are mostly from the north, while those that end in "o" are mostly from the south. The name comes from the Old French word "teste," meaning "head." The name probably began as a nickname for someone with an unusually large or oddly-shaped head. There are many compound names similar to this name, such as "Testagrossa," meaning "big head."

Early History of the Testoni family

This web page shows only a small excerpt of our Testoni research. Another 59 words (4 lines of text) covering the years 1611 and 1650 are included under the topic Early Testoni History in all our PDF Extended History products and printed products wherever possible.

More information is included under the topic Early Testoni Notables in all our PDF Extended History products and printed products wherever possible.

Migration of the Testoni family

Some of the first settlers of this family name or some of its variants were: Vincenzo and Stefano Testa, who arrived in North America onboard the Orsola in 1882 and Lorenzo Testieri, who arrived in 1893 on the SS Alessia.

Historic Events for the Testoni family +