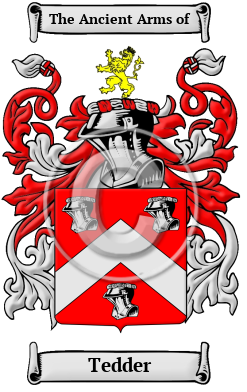 The Welsh name Tedder comes from the personal name Tudur, an ancient Celtic name of unknown meaning. It is thought that the name, especially the form Tewdwr, may have also emerged as a Welsh version of the Latin Theodorus.

Early Origins of the Tedder family

The surname Tedder was first found in Herefordshire, where Tudor Trevor was Lord of Hereford, Whittington, and both Maelors. He was founder of the Tribe of the Marches, born in Denbigh, son of Ynyr Ap Cadforch, whose descendants intermarried with the distinguished families of North Wales.

Theodore (602?-690), was Archbishop of Canterbury, a native of Tarsus in Cilicia. "He studied at Athens, had a scholarly knowledge of Greek and Latin, and was well versed in sacred and profane literature and in philosophy, which caused him to receive the surname 'Philosopher.' At the time of Theodore's arrival the English church lacked order, administrative organisation, discipline, and culture. " [1]

Early History of the Tedder family

Although there are not an extremely large number Welsh surnames, there are an inordinately large number of spelling variations of those surnames. This variety of spellings began almost immediately after the acceptance of surnames within Welsh society. As time progressed, these old Brythonic names were eventually were recorded in English. This process was problematic in that many of the highly inflected sounds of the native language of Wales could not be properly captured in English. Some families, however, did decide to modify their own names to indicate a branch loyalty within the family, a religious adherence, or even a patriotic affiliation. The name Tedder has seen various spelling variations: Tudor, Tudyr Tuder, Tudar and others.

Prominent amongst the family during the late Middle Ages was Maredydd ap Tudur (Meredith Tudor) (died 1406), Welsh soldier and nobleman from the Tudor family of Penmynydd and Owen Tudor's father, supported the 1400 Welsh uprising of his first cousin Owain Glyndwr, following the demise of Glyndwr's revolt, much of the Tudor family's lands at Penmynydd and elsewhere were forfeited to the English Crown; Rhys ap Tudur (died 1411), a Welsh nobleman and a key figure in the revolt of Owain Glyndwr, held the offices of sheriff and escheator of Anglesey as well as the Forester of Snowdon, outbreak of the...
Another 162 words (12 lines of text) are included under the topic Early Tedder Notables in all our PDF Extended History products and printed products wherever possible.

In the United States, the name Tedder is the 6,290th most popular surname with an estimated 4,974 people with that name. [2]

Tedder migration to the United States +

In the late 19th and early 20th centuries, many people from Wales joined the general migration to North America in search of land, work, and freedom. These immigrants greatly contributed to the rapid development of the new nations of Canada and the United States. They also added a rich and lasting cultural heritage to their newly adopted societies. Investigation of immigration and passenger lists has revealed a number of people bearing the name Tedder:

Tedder Settlers in United States in the 17th Century

Tedder Settlers in United States in the 19th Century

Tedder Settlers in United States in the 20th Century

Tedder Settlers in West Indies in the 17th Century