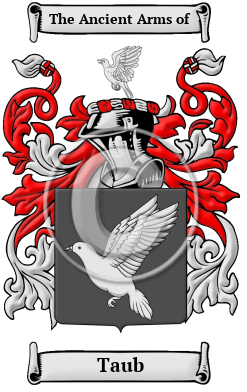 In the ancient German province of Westphalia, the surname Taub evolved. It is a nickname, a style of hereditary surname that developed out of the traditional German eke-names, that identified people by naming them after a physical characteristic or other identifiable trait. Taub is a name for a mild and gentle person. The name was originally derived from the Old German word tuba, and German tube, which meant pigeon or dove. Often nicknames described strong traits or attributes that people wished to emulate in a specific animal. In the pre-Christian era, many pagan gods and demigods were believed to be a mixture of animals and humans, such as the Greek god Pan who was the god of flocks and herds and was represented as a man with the legs, horns and ears of a goat. In the Middle Ages, anthropomorphic ideas, which attributed human qualities and form to gods or animals, were held about the characters of other living creatures. They were based on the creature's habits. Moreover, these associations were reflected in folk tales, mythology, and legends which portrayed animals behaving as humans.

Early Origins of the Taub family

The surname Taub was first found in Westphalia, where the name emerged in mediaeval times as one of the notable families of the region. From the 13th century the surname was identified with the great social and economic evolution which made this territory a landmark contributor to the development of the nation.

Early History of the Taub family

Many cultural groups lived in the German states in medieval times. Each had its own dialect and traditions, and unique variations of popular names. Low German, which is similar to contemporary Dutch, was spoken in Westphalia. German names are characterized by additions such as regional suffixes and phrases that tell something about the origin or background of its original bearer. Further contributing to the variation in German names was the fact that there were no spelling rules in medieval times: scribes recorded names according to their sound. The recorded spelling variations of Taub include Taube, Taub, Towbe, Towb, Toube, Tauble, Daube and others.

Another 39 words (3 lines of text) are included under the topic Early Taub Notables in all our PDF Extended History products and printed products wherever possible.

Taub migration to the United States +

Taub Settlers in United States in the 18th Century