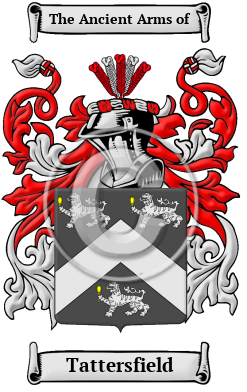 Early Origins of the Tattersfield family

The surname Tattersfield was first found in Lincolnshire where William the Conqueror bestowed this and other lands upon one of his followers called Eudo, from whom descended Robert de Tateshall, who built Tattershall castle, and whose son was created Baron Tateshall in 1295. [1] [2] Another source has a slightly different timeline: "This place was a Roman military post, as two encampments at Tattershall Park in its immediate neighbourhood indicate; and was granted at the Conquest to Eudo, one of William's followers, whose descendants erected a castle about 1440, south-westward from the town. The fortress stood on a moor, and was surrounded by two fosses, which received the waters of the Bain; the principal part was demolished during the parliamentary war. " [3] The Domesday Book of 1086 lists the place as Tateshale. [4]

Early History of the Tattersfield family

This web page shows only a small excerpt of our Tattersfield research. Another 71 words (5 lines of text) covering the years 1066, 1295, 1724 and 1795 are included under the topic Early Tattersfield History in all our PDF Extended History products and printed products wherever possible.

The English language only became standardized in the last few centuries. For that reason, spelling variations are common among many Anglo-Norman names. The shape of the English language was frequently changed with the introduction of elements of Norman French, Latin, and other European languages; even the spelling of literate people's names were subsequently modified. Tattersfield has been recorded under many different variations, including Tattersall, Tattershall, Tateshall, Tatersall, Tatershall, Tatteshall, Tetstall and many more.

Another 47 words (3 lines of text) are included under the topic Early Tattersfield Notables in all our PDF Extended History products and printed products wherever possible.

Migration of the Tattersfield family

To escape the uncertainty of the political and religious uncertainty found in England, many English families boarded ships at great expense to sail for the colonies held by Britain. The passages were expensive, though, and the boats were unsafe, overcrowded, and ridden with disease. Those who were hardy and lucky enough to make the passage intact were rewarded with land, opportunity, and social environment less prone to religious and political persecution. Many of these families went on to be important contributors to the young nations of Canada and the United States where they settled. Tattersfields were some of the first of the immigrants to arrive in North America: Richard Tattersall who settled in New Jersey in 1677 with his wife and children; James Tattershell settled in Virginia in 1727; Christopher Tattersall settled in Savannah, Georgia in 1820..