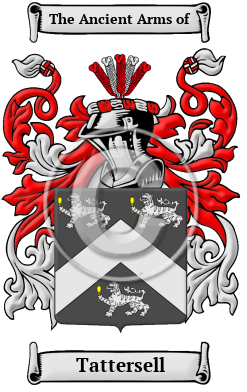 The history of the Tattersell family name begins after the Norman Conquest of 1066. They lived in Lincolnshire, in the parish of Tattersall (Tattershall.)

Early Origins of the Tattersell family

The surname Tattersell was first found in Lincolnshire where William the Conqueror bestowed this and other lands upon one of his followers called Eudo, from whom descended Robert de Tateshall, who built Tattershall castle, and whose son was created Baron Tateshall in 1295. [1] [2] Another source has a slightly different timeline: "This place was a Roman military post, as two encampments at Tattershall Park in its immediate neighbourhood indicate; and was granted at the Conquest to Eudo, one of William's followers, whose descendants erected a castle about 1440, south-westward from the town. The fortress stood on a moor, and was surrounded by two fosses, which received the waters of the Bain; the principal part was demolished during the parliamentary war. " [3] The Domesday Book of 1086 lists the place as Tateshale. [4]

Early History of the Tattersell family

This web page shows only a small excerpt of our Tattersell research. Another 71 words (5 lines of text) covering the years 1066, 1295, 1724 and 1795 are included under the topic Early Tattersell History in all our PDF Extended History products and printed products wherever possible.

Anglo-Norman names tend to be marked by an enormous number of spelling variations. This is largely due to the fact that Old and Middle English lacked any spelling rules when Norman French was introduced in the 11th century. The languages of the English courts at that time were French and Latin. These various languages mixed quite freely in the evolving social milieu. The final element of this mix is that medieval scribes spelled words according to their sounds rather than any definite rules, so a name was often spelled in as many different ways as the number of documents it appeared in. The name was spelled Tattersall, Tattershall, Tateshall, Tatersall, Tatershall, Tatteshall, Tetstall and many more.

Another 47 words (3 lines of text) are included under the topic Early Tattersell Notables in all our PDF Extended History products and printed products wherever possible.

Tattersell Settlers in Australia in the 19th Century