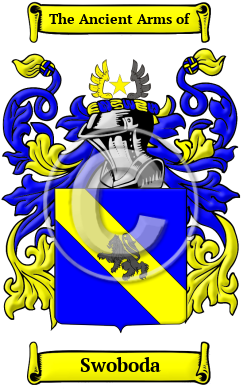 The surname Swoboda is a derived from the Czech word "svoboda," which means 'freedom, free owner or yeoman'. This was the term used in feudal times for a freeman, that is, a free man who is not a servant to someone else. Svoboda is the third most common Czech surname and has been since at least 1937.

Early Origins of the Swoboda family

The surname Swoboda was first found in Moravia and Bohemia that today form the proud Czech Republic.

Early History of the Swoboda family

Spelling variations of this family name include: Szvoboda, Swoboda, Svoboda and others.

Notable among the name Swoboda at this time we found Leopold Svoboda who was granted Austrian knighthood from Emperor Franz Josef I on April 17, 1873 for his outstanding services. Rudolf Swoboda the Elder (1819-1859) was an Austrian landscape and animal painter. He is generally referred to as The Elder to distinguish him from his nephew, Rudolf. His...
Another 55 words (4 lines of text) are included under the topic Early Swoboda Notables in all our PDF Extended History products and printed products wherever possible.

In the United States, the name Swoboda is the 16,710th most popular surname with an estimated 2,487 people with that name. [1]

Swoboda migration to the United States +

Swoboda Settlers in United States in the 19th Century

Swoboda Settlers in United States in the 20th Century