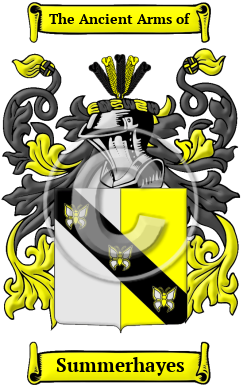 Early Origins of the Summerhayes family

The surname Summerhayes was first found in Derbyshire at Somersall, a parish four miles from Uttoxeter. Now known as Somersall-Herbert, the parish dates back to the Domesday Book of 1086 when it was recorded as Summersale. [1]

This place name literally means "nook of land of a man called Summor," from this Old English personal name + "halh." The manorial affix from the Fitzherbert family was made in the 13th century. [2]

One of the first records of the family was Jacobus de Sumereshal who was listed in 1200 in the Curia Regis Rolls for Herefordshire. Over one hundred years later, according to the Assize Rolls of Staffordshire, William de Somersale held lands there at that time. [3]

Later in Yorkshire, Somerscales was listed in the Yorkshire Poll Tax Rolls of 1379, as was his son, John Somerscales, Jr. [4]

Somersall Hall is a small country house near Brampton, Chesterfield, Derbyshire. Somersal Herbert Hall is a privately owned timber-framed 16th-century country house at Somersal-Herbert, near Ashbourne, Derbyshire, in England. This house was originally built by Thomas Fitzherbert, second son of Sir William Fitzherbert of Norbury c. 13th century. The present house was rebuilt by John Fitzherbert on the site of an earlier manor house in 1564.

Early History of the Summerhayes family

This web page shows only a small excerpt of our Summerhayes research. Another 69 words (5 lines of text) covering the years 1600, 1730 and 1737 are included under the topic Early Summerhayes History in all our PDF Extended History products and printed products wherever possible.

More information is included under the topic Early Summerhayes Notables in all our PDF Extended History products and printed products wherever possible.

Migration of the Summerhayes family

Some of the first settlers of this family name or some of its variants were: Jonas Somerscales settled in Maryland in 1674.