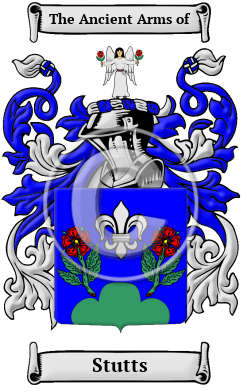 The German surname Stutts is thought to derive from a Southern German word "stutz," meaning "a steep cliff;" thus as a name it was likely originally used for someone who lived near a steep cliff. There is also a Middle High German word "stutz," meanings "pushy." Names evolving from this meaning, the name would have been initially given as nicknames.

Early Origins of the Stutts family

The surname Stutts was first found in Lorch, Ruedesheim, where the name is thought to have originated. The earliest known instance of this name was recorded in this city, where Helmannus dictus Stuz was living in 1319.

Early History of the Stutts family

Another 32 words (2 lines of text) are included under the topic Early Stutts Notables in all our PDF Extended History products and printed products wherever possible.

In the United States, the name Stutts is the 14,170th most popular surname with an estimated 2,487 people with that name. [1]

Migration of the Stutts family

Some of the first settlers of this family name or some of its variants were: Johann Jacob Stutzman, who settled in Philadelphia in 1727; Anna Stutz, a German Mennonite living in Pennsylvania in 1735; Hans Stutz and his wife Barbara, who emigrated from the Palatinate to Georgia with their five children in 1741.