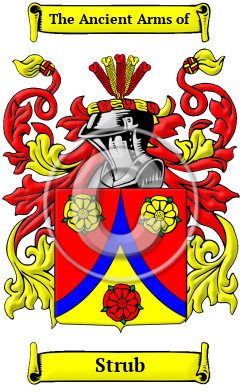 The history of the Strub family began in the historic kingdom of Schleswig, which is the northernmost state in western Germany. By and large, hereditary surnames were formed in Germany when areas of Schleswig, and most of the German states, were a part of the Holy Roman Empire. At this time, as the population of Europe swelled and travel became easier, people began to encounter others sharing their own name. They avoided confusion by adopting a second name. A common form of surname found in Schleswig are those that are derived from nicknames. Nickname surnames were derived from an eke-name, or added name. They usually reflected the physical characteristics or attributes of the first person that used the name. The surname Strub was a name for a man who was unkempt and had hair that was shaggy and bristly. Ancient records reveal the name Strub is derived from the Old German "strub," which means "rough" or "unkept."

Early Origins of the Strub family

The surname Strub was first found in Hamburg, where the family rose to prominence early in the mediaeval era. From the 13th century the surname was identified with the great social and economic evolution which made this territory a landmark contributor to the development of the nation. Individual bearers of this name first mentioned in ancient chronicles include the knight Gerung Strubel, who was born in Waldshut in 1240. He was also recorded as Gerung von Ofteringen in 1280, and his sons were the knights Hartman, Ulrich, and Friedrich Strubel. Chronicles also mention "Lord Manegold von Estorpe der Struve, the horseman," and Radolf Struve of Stralsund (c.1297).

Early History of the Strub family

This web page shows only a small excerpt of our Strub research. Another 245 words (18 lines of text) covering the year 1793 is included under the topic Early Strub History in all our PDF Extended History products and printed products wherever possible.

More information is included under the topic Early Strub Notables in all our PDF Extended History products and printed products wherever possible.

Strub migration to the United States +

Strub Settlers in United States in the 18th Century

Strub Settlers in United States in the 19th Century