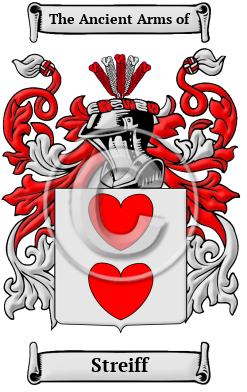 Early Origins of the Streiff family

The surname Streiff was first found in the canton of Chur, Switzerland which is thought to be the ancient homeland of the bearers of Streiff, perhaps from the 9th century. The earliest documented evidence of the name was of one Bertholdus Streipho, who was a witness at the court of Worms in 1182.

Early History of the Streiff family

Spelling variations of this family name include: Streif, Streiff, Streiffel, Straif,Straiff and others.

Another 48 words (3 lines of text) are included under the topic Early Streiff Notables in all our PDF Extended History products and printed products wherever possible.

Migration of the Streiff family

Some of the first settlers of this family name or some of its variants were: Melcher Streiff, and Hans Jacob Streiff, who both arrived in Carolina in 1738; David Streiff, who was on record in Pennsylvania in 1772; Christian Streiff, who arrived at the port of New York in 1837.