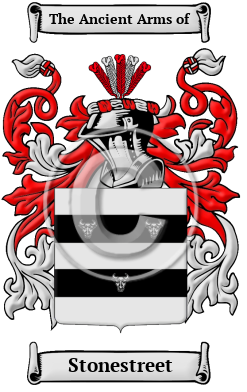 Early Origins of the Stonestreet family

The surname Stonestreet was first found in Sussex where "the Stonestreets appear to have originated." [1] It is generally thought that the name was derived from Stanistreet, the Roman road which ran from Regnum (Chichester) to London and was coined for someone who lived by that road. The first record of the name was found in Sussex in the year 1275 when Saloman Stonstret held estates in that shire.

Early History of the Stonestreet family

This web page shows only a small excerpt of our Stonestreet research. Another 87 words (6 lines of text) covering the years 1276, 1455 and 1487 are included under the topic Early Stonestreet History in all our PDF Extended History products and printed products wherever possible.

More information is included under the topic Early Stonestreet Notables in all our PDF Extended History products and printed products wherever possible.

Stonestreet Settlers in Australia in the 19th Century