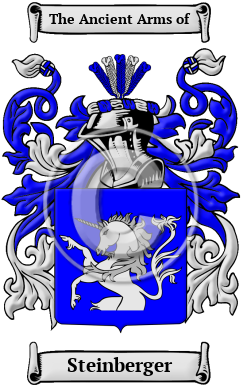 It was in the ancient duchy of Saxony, a land with a long and glorious history, that the noble surname Steinberger first appeared. After the fall of the Roman Empire in the 5th century, the Saxons inhabited the territories in north central Germany. However, in the 8th century, the pagan Saxons were conquered by the Carolingian Emperor Charlemagne. Charlemagne, who wanted to protect the Rhineland and convert new souls to Christianity, repeatedly invaded the Saxon lands and baptized the Saxons by force. The Saxons resisted his campaigns for 32 years, but in 782, Charlemagne ordered the execution of nearly 5,000 Saxons in a single day. Saxony submitted to Charlemagne's army and the missionaries that followed. By the 9th century, Frankish control of Saxony was established and the Saxons were gradually converted to Christianity. By the end of the 10th century, the Saxons governed one of the most powerful duchies in Germany.

Early Origins of the Steinberger family

The surname Steinberger was first found in Lower Saxony, where the family contributed greatly to the development of an emerging nation and would later play a large role in the political conflicts of the area. The family branched into many houses, many of which acquired estates and manors throughout the surrounding regions, where they played significant roles in the social and political affairs.

Early History of the Steinberger family

Spelling variations of this family name include: Steinburg, Steinberg, Steinbrich, Steinburger, Steinberger, Steinpurg and many more.

Another 37 words (3 lines of text) are included under the topic Early Steinberger Notables in all our PDF Extended History products and printed products wherever possible.

In the United States, the name Steinberger is the 17,130th most popular surname with an estimated 2,487 people with that name. [1]

Steinberger migration to the United States +

Steinberger Settlers in United States in the 18th Century

Steinberger Settlers in United States in the 19th Century

Steinberger Settlers in Australia in the 19th Century