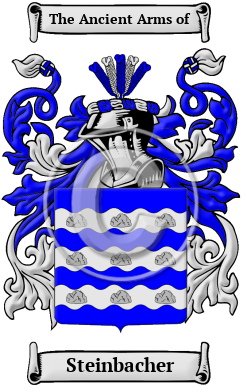 The name Steinbacher emerged in Pomerania, which was a territory of Germany and a maritime province of Prussia. Pomerania is bounded on the south by Brandenburg, on the west by Mecklenburg, and on the east by Poland. During the 5th century, Pomerania was settled by Pommern, who were a Slavic tribe. Pommern, meaning on the sea, became the name of this region during the reign of the Charlemagne.

Early Origins of the Steinbacher family

The surname Steinbacher was first found in Pomerania, where the name Steinbeck was anciently associated with the tribal conflicts of the area. Bearers of this surname declared allegiances to many nobles and princes of early history, lending their support in struggles for power and status within the region. The Steinbeck name has been traced to the correspondences of Duke Otto of Pomerania as early as 1308. They branched into different houses and their contributions were sought by many leaders in their search for power.

Early History of the Steinbacher family

This web page shows only a small excerpt of our Steinbacher research. Another 81 words (6 lines of text) covering the year 1530 is included under the topic Early Steinbacher History in all our PDF Extended History products and printed products wherever possible.

More information is included under the topic Early Steinbacher Notables in all our PDF Extended History products and printed products wherever possible.

Steinbacher migration to the United States +

Steinbacher Settlers in United States in the 18th Century