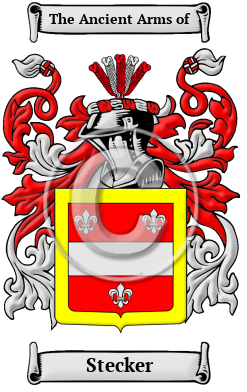 The name Stecker was first used by the people of the German province of Westphalia, which lay in the area between the Rhine and Wesser rivers. It is a patronymic name, derived from the given name of the father of the original bearer. Along with metronymic names, which come from the name of the mother of the bearer, patronymics were one of the most popular early German name types. Stecker was derived from the popular medieval Germanic personal name Stecho. The name Stecker is also of local origin that is derived from the Old Germanic word "steck," which referred to a parcel of land. The steck was a tract of pasture land.

Early Origins of the Stecker family

The surname Stecker was first found in Westphalia and the lower Rhine region, where the name Steck came from aristocratic beginnings and gained a significant reputation for its contribution to the emerging mediaeval society. It later became more prominent as many branches of the same house acquired distant estates and branches, holding the title of counts in Dortmund, always elevating their social status by their great contributions to society.

Early History of the Stecker family

This web page shows only a small excerpt of our Stecker research. Another 92 words (7 lines of text) covering the years 1702 and 1776 are included under the topic Early Stecker History in all our PDF Extended History products and printed products wherever possible.

Many cultural groups lived in the German states in medieval times. Each had its own dialect and traditions, and unique variations of popular names. Low German, which is similar to contemporary Dutch, was spoken in Westphalia. German names are characterized by additions such as regional suffixes and phrases that tell something about the origin or background of its original bearer. Further contributing to the variation in German names was the fact that there were no spelling rules in medieval times: scribes recorded names according to their sound. The recorded spelling variations of Stecker include Steck, Stech, Stechel, Stecher, Steckler, Steckel, Steckell, Steckle, Steckler, Stecker, Stecklen, Stek and many more.

Another 41 words (3 lines of text) are included under the topic Early Stecker Notables in all our PDF Extended History products and printed products wherever possible.

In the United States, the name Stecker is the 12,511st most popular surname with an estimated 2,487 people with that name. [1]

Stecker migration to the United States +

Stecker Settlers in United States in the 18th Century

Stecker Settlers in United States in the 19th Century

Stecker Settlers in United States in the 20th Century