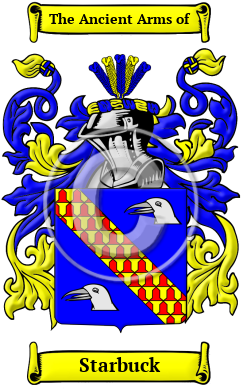 The name Starbuck is thought to have been derived from the Old Norse, bokki which means "vir grandis, corpore et animo." Hence stortocki from side, great, "vir imperiosus." [1]

Another source notes that "Starbeck (brook near where sedge grew), in Yorkshire; dweller at, or near, a stream where sedge or swamp grass grew." [2]

Early Origins of the Starbuck family

The surname Starbuck was first found in the West Riding of Yorkshire at Starbeck in Harrogate. One of the first records of the family is Robert Starbok who was listed in the Yorkshire Poll Tax Rolls of 1379. [3] Another source notes this entry in the Latin form: Robertus Starbok. [4] Starbeck is a hamlet between Ripon and Knaresborough.

Early History of the Starbuck family

This web page shows only a small excerpt of our Starbuck research. Another 34 words (2 lines of text) covering the years 177 and 1772 are included under the topic Early Starbuck History in all our PDF Extended History products and printed products wherever possible.

More information is included under the topic Early Starbuck Notables in all our PDF Extended History products and printed products wherever possible.

In the United States, the name Starbuck is the 10,153rd most popular surname with an estimated 2,487 people with that name. [5]

Starbuck migration to the United States +

Starbuck Settlers in United States in the 17th Century

Starbuck Settlers in United States in the 19th Century

Starbuck Settlers in United States in the 20th Century