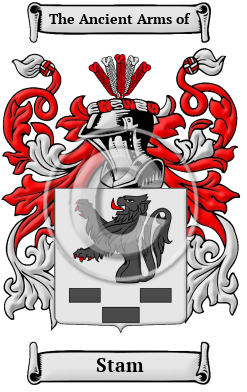 The distinguished surname Stam is Dutch in origin. It is thought to be derived from the Old High German "stamme," meaning "tree trunk," and was most likely first borne by someone who lived near an outstanding tree. Alternatively, the name may have been initially bestowed as a nickname on someone who had a strong, trunk-like build.

Early Origins of the Stam family

The surname Stam was first found in Holland, where the name is thought to have first emerged. The name could also be found at an early period in the neighboring country of Germany, where Guntram Stamme was recorded to be living in the northern province of Hesse in 1397. The Stam family was instrumental during this early period, and contributed greatly to the development of medieval Dutch society.

Early History of the Stam family

This web page shows only a small excerpt of our Stam research. Another 77 words (6 lines of text) covering the years 1457, 1620, 1666, and 1798 are included under the topic Early Stam History in all our PDF Extended History products and printed products wherever possible.

Spelling variations of this family name include: Stam, Stamme, Stamli, Stemme and others.

Another 36 words (3 lines of text) are included under the topic Early Stam Notables in all our PDF Extended History products and printed products wherever possible.

Stam migration to the United States +

Stam Settlers in United States in the 17th Century

Stam Settlers in United States in the 18th Century

Stam Settlers in United States in the 19th Century