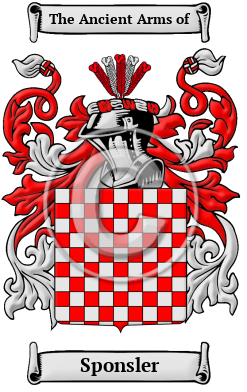 Early Origins of the Sponsler family

The surname Sponsler was first found in Austria, where the name became noted for its many branches in the region, each house acquiring a status and influence which was envied by the princes of the region. The earliest recorded instance of the name appears to be of Hildegard Gräfin von Sponheim (1098-1179,) who was an Abbess (head of a convent.) Loretta of Sponheim (1300-1346) was a countess of the noble house of Sponheim-Starkenburg. Sponheim Castle is a medieval ruin in Burgsponheim on the edge of the Hunsrück mountain range in Rhineland-Palatinate, Germany and was the ancestral home of the Counts of Sponheim, a medieval German noble family, which originated in Rhenish Franconia.

Early History of the Sponsler family

This web page shows only a small excerpt of our Sponsler research. Another 68 words (5 lines of text) covering the years 174 and 1742 are included under the topic Early Sponsler History in all our PDF Extended History products and printed products wherever possible.

Spelling variations of this family name include: Sponheim, Spon, Spontin and others.

More information is included under the topic Early Sponsler Notables in all our PDF Extended History products and printed products wherever possible.

Sponsler migration to the United States +

Sponsler Settlers in United States in the 18th Century