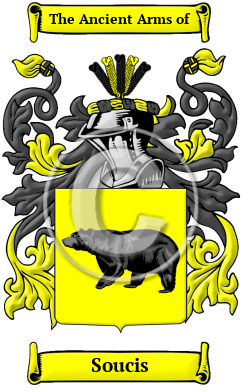 Early Origins of the Soucis family

The surname Soucis was first found in Perugia (Latin: Perusia), the capital city of the region of Umbria in central Italy, crossed by the Tiber River, capital of the province of Perugia. Perusia took part in a rebellion in 295 B.C. and was reduced with the exceptions of the temples Vulcan and Juno. In the 9th century A.D the city was a papal territory but remained true to the Guelphs. In the 15th century it was the center of the Baglioni family. It was visited by earthquakes in 1832,38 and 1854. It was united to Piedmont in 1860 under the Kingdom of Italy. The city is rich in churches, museums and galleries. In those ancient times only persons of rank, the podesta, clergy, city officials, army officers, artists, landowners were entered into the records. To be recorded at this time, at the beginning of recorded history, was of itself a great distinction and indicative of noble ancestry.

Early History of the Soucis family

This web page shows only a small excerpt of our Soucis research. Another 121 words (9 lines of text) covering the years 1400, 1695 and 1780 are included under the topic Early Soucis History in all our PDF Extended History products and printed products wherever possible.

Spelling variations of this family name include: Sozzi, Socci, Suzzi, Souci, Succi, Sozzilla and many more.

More information is included under the topic Early Soucis Notables in all our PDF Extended History products and printed products wherever possible.

Migration of the Soucis family

Some of the first settlers of this family name or some of its variants were: Carlo Sozzi, who arrived in San Francisco in 1850; and Domenico Succi, who came to Ashtabula Co., OH sometime between 1875 and 1906.