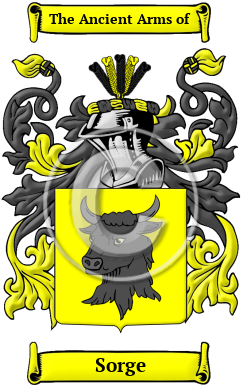 The German surname Sorge has two possible origins. The name may be of nickname origin, deriving from the German word "sorge" meaning "sorrow." Alternatively, it may be a habitation name, referring to the town of Sorge located in Saxony. A branch of the Sorge family may have sprung from a resident of this area.

Early Origins of the Sorge family

The surname Sorge was first found in the city of Sorge, where it is believed that Heinrich Sorge, the earliest recorded bearer of the name, was living in 1296. The Sorge family was instrumental during this early period, playing an important role in the development of medieval society.

Early History of the Sorge family

Spelling variations of this family name include: Sorg, Sorge, Sörgel, and Sorghe and others.

Another 29 words (2 lines of text) are included under the topic Early Sorge Notables in all our PDF Extended History products and printed products wherever possible.

Sorge migration to the United States +

Sorge Settlers in United States in the 18th Century

Sorge Settlers in United States in the 19th Century