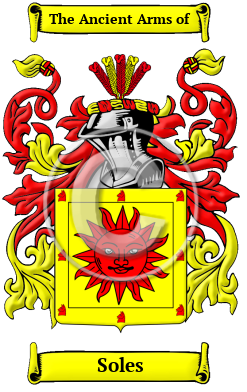 From the historical and enchanting region of Spain emerged a multitude of noble families, including the distinguished Soles family. The original bearer of the name Soles, which is a local surname, once lived, held land, or was born in the beautiful region of Spain. In Spain, hereditary surnames were adopted according to fairly general rules and during the late Middle Ages, names that were derived from localities became increasingly widespread. Local names originally denoted the proprietorship of the village or estate. The Soles family originally lived in any of the numerous village and towns named Soler. This place-name is derived from the word "soler," which means "site" or "plot" and it is ultimately derived from the Late Latin word "solarium," which means "bottom" or "ground."

Early Origins of the Soles family

The surname Soles was first found in Catalonia, in northeastern Spain.

Early History of the Soles family

This web page shows only a small excerpt of our Soles research. Another 114 words (8 lines of text) covering the years 1074 and 1469 are included under the topic Early Soles History in all our PDF Extended History products and printed products wherever possible.

Prominent among members of the family was Isabel de Solís, a fourteenth century noblewoman who was taken captive by the Muslims of Granada. She converted to Islam, took the name Zoraya, then married the King, Abulhassan. The Tower of La Cautiva ("The Captive"), which still stands inside the Alhambra palace in Granada, was named for Isabel de Solís. Also of note were seventeenth century Spanish historian and...
Another 67 words (5 lines of text) are included under the topic Early Soles Notables in all our PDF Extended History products and printed products wherever possible.

In the United States, the name Soles is the 10,420th most popular surname with an estimated 2,487 people with that name. [1]

Soles migration to the United States +

Soles Settlers in United States in the 18th Century

Historic Events for the Soles family +