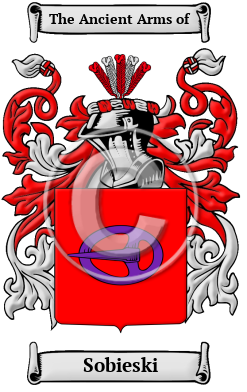 Early Origins of the Sobieski family

Early History of the Sobieski family

Prominent among those of the name Sobieski in this period were the Sobieski family of Lubel, a sept of the great clan Janina. The progenitor of this family Wojciech took part in the wars of Stefan Batory against the Duchy of Moscow. Another member, Marek Sobieski (d.1606), was the Governor of Lubel during the reigns of Kings Batory and Zygmunt III. He became famous for his military acumen. Stefan Batory once said of him, "If the entire kingdom's fortune only depended on skirmishes, nobody would be more shrewd nor trustful than Sobieski." Zygmunt III rewarded Sobieski by granting him...
Another 98 words (7 lines of text) are included under the topic Early Sobieski Notables in all our PDF Extended History products and printed products wherever possible.

Sobieski migration to the United States +

Sobieski Settlers in United States in the 19th Century

Sobieski Settlers in United States in the 20th Century