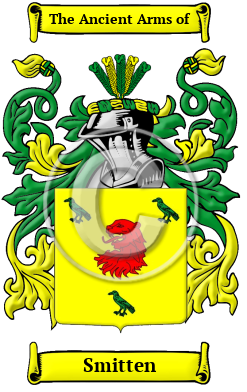 Early Origins of the Smitten family

The surname Smitten was first found in Midlothian at Smytheton, now named Smeaton [1] or in the North Riding of Yorkshire at either Great Smeaton, Kirk Smeaton or Little Smeaton. [2]

Early History of the Smitten family

Spelling variations of this family name include: Smeaton, Smeeton, Smitten, Smitton, Smeton, Smithton and many more.

Another 44 words (3 lines of text) are included under the topic Early Smitten Notables in all our PDF Extended History products and printed products wherever possible.

Smitten migration to the United States +

Smitten Settlers in United States in the 18th Century

Historic Events for the Smitten family +