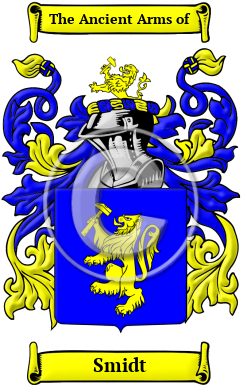 Early Origins of the Smidt family

The surname Smidt was first found in the northern provinces that were later to make up Prussia, where the name emerged in mediaeval times as one of the notable families of the region.

Early History of the Smidt family

In the medieval era, many different cultural groups lived in the German states. There are thus many regional variations of German surnames from that era. Westphalians spoke Low German, which is similar to modern Dutch. Many German names carry suffixes that identify where they came from. Others have phrases attached that identify something about the original bearer. Other variations in German names resulted from the fact that medieval scribes worked without the aid of any spelling rules. The spelling variations of the name Smidt include Schmidt (northern Germany), Schmid (southern Germany), Schmitz (Rhineland), Schmied, Schmitt, Smith (English) and many more.

Notable figures of the time with the name Smidt were Bernhard Schmidt (1630-1708), known as "Father Smith", who was a famous organ builder; Georg Philipp Schmidt (1766-1849), known as "Schmidt from Luebeck", who was a physician and Romantic poet; Friederich Wilhelm Schmidt (1764-1838), who was a Prussian pastor and poet; Christoph von Schmid (1768-1854), Roman Catholic priest and writer of Christmas...
Another 60 words (4 lines of text) are included under the topic Early Smidt Notables in all our PDF Extended History products and printed products wherever possible.

In the United States, the name Smidt is the 13,405th most popular surname with an estimated 2,487 people with that name. [1]

Smidt migration to the United States +

The state of Prussia was a great influence on the shape of modern Germany. After the Second World War, Prussia's land was divided among the Soviet Union, Poland, East Germany and West Germany and the state was abolished. Some Prussians remained in those countries after the war, while many others migrated to North America in search of a new start. Philadelphia was their primary point of entry to the United States, after which many of them moved on to Ohio, Texas, Illinois, California, New York, and Maryland. A large number of Prussians also migrated to Ontario and the prairie provinces as United Empire Loyalists. Analysis of immigration records has shown some of the first Smidts to arrive in North America, and among them were:

Smidt Settlers in United States in the 18th Century

Smidt Settlers in United States in the 19th Century