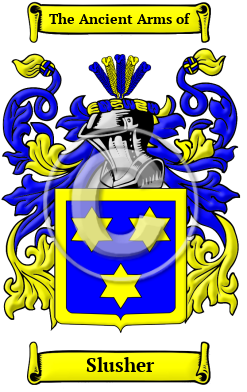 There are several possible derivations for the Slusher surname. In some instances, it is no doubt derived from the Old High German "sliozen" meaning "to lock" or "shut," and the name was occupational for a locksmith. Alternatively, the name is also thought to be derived from the Middle High German word "schloss" meaning "castle" or "fortress," and as a name probably described someone who lived in a castle or was employed there.

Early Origins of the Slusher family

The surname Slusher was first found in West Prussia and Pomerelia, where the name emerged in mediaeval times as one of the notable families in the western region. From the 13th century onwards the surname was identified with the great social and economic evolution which made this territory a landmark contributor to the development of the nation. Early records show a Chuonrad Rufus faber qui dicitur Slosser in 1290, in records relating to Basel; and he is recorded again in 1294 as Cuonrad dictus Slosser.

Early History of the Slusher family

This web page shows only a small excerpt of our Slusher research. Another 36 words (3 lines of text) covering the years 1360 and 1368 are included under the topic Early Slusher History in all our PDF Extended History products and printed products wherever possible.

Spelling variations of this family name include: Schlusser, Schlüsser, Shlusser, Slusher and others.

More information is included under the topic Early Slusher Notables in all our PDF Extended History products and printed products wherever possible.

In the United States, the name Slusher is the 7,124th most popular surname with an estimated 4,974 people with that name. [1]

Migration of the Slusher family

Some of the first settlers of this family name or some of its variants were: John Jacob Slusher, who came to Belize in 1792; S. Slusher, who settled in San Francisco in 1852; Philip Slusher, who arrived in Indiana sometime between 1852 and 1861.