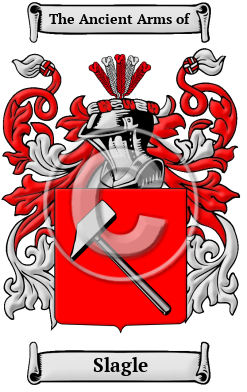 Saxony, one of the oldest and most beautiful regions of Germany, is the esteemed birthplace of the Slagle family. Although people were originally known only by a single name, it became necessary for people to adopt a second name to identify themselves as populations grew and travel became more frequent. This happened later in Germany than in most other European countries and surnames were not introduced in the German duchies until after the 12th century. The manner in which Slagle became a hereditary surname is extremely interesting because it was initially a name of an occupation. Occupational surnames date back to the feudal era. However, under the Feudal System, occupational names did not become hereditary until the offices themselves became hereditary. It was only after an occupation was inherited by several generations in lineal descent, that occupational names came to be applied to entire families, and so became hereditary surnames.

Early Origins of the Slagle family

The surname Slagle was first found in the Anhalt region of ancient Saxony, where the name emerged in mediaeval times as one of the notable families of the region. From the 13th century the surname was identified with the great social and economic evolution which made this territory a major contributor to the political development of the nation. Chronicles first mention Wolbero Slegel of Cologne in 1142, and the knight Herman Slegel of Bavaria in 1309.

Early History of the Slagle family

This web page shows only a small excerpt of our Slagle research. Another 162 words (12 lines of text) covering the years 1719, 1749, 1767, 1821, 1845, and 1868 are included under the topic Early Slagle History in all our PDF Extended History products and printed products wherever possible.

Another 33 words (2 lines of text) are included under the topic Early Slagle Notables in all our PDF Extended History products and printed products wherever possible.

In the United States, the name Slagle is the 3,848th most popular surname with an estimated 7,461 people with that name. [1]

Slagle migration to the United States +

Slagle Settlers in United States in the 19th Century

Slagle Settlers in United States in the 20th Century