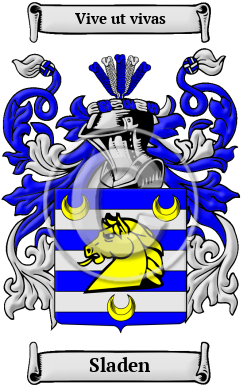 Early Origins of the Sladen family

The surname Sladen was first found in Lancashire at Sladen, a hamlet in the parish of Littleborough. [1]

Today, Littleborough (and Sladen) are part of Greater Manchester in the Metropolitan Borough of Rochdale. Little records can be found of the Sladen place name. One of the first records of the name was found in the Yorkshire Poll Tax Rolls of 1379 where Johannes Sladen was listed. [1]

While this is the generally understood origin of the name, another source notes the following: "this family, seated on the coast of Kent in the early part of the XVII. century, and hardly found elsewhere until within the XIX., are presumed to have come from the town of Schleiden in the government of Aix-la-Chapelle in Rhenish Prussia. John Sleidan, the historian of the Reformation in Germany, a native of that town, was deputed to the English court by the German reformers in 1545, and it is probable that others of his name and religion afterwards sought a home in this country. Sladden, Sladdon, and Slodden, may he variations of the name; and this seems the more probable, inasmuch as the continental town is pronounced as if written with two d's. There seems, however, to be no recognized kindred between the Sladens and the Sladdens. The name of Schleiden is still well known in Germany. A Thos de Slayden was mayor of Winchester in 1222." [2]

In some ways, the last entry of "Thos de Slayden," negates this author's theory as he held the position of mayor in 1222, at least three hundred years before! However, the reference to Kent is agreeable, as we will soon explore.

Early History of the Sladen family

Distinguished members of the family include Sir Charles Sladen (1816-1884), Australian statesman, born at Ripple Park, Kent, in 1816, was second son of John Baker Sladen of Ripple Park, Kent, a deputy-lieutenant for the Cinque ports, by Ethelred, eldest daughter of Kingsman Baskett St. Barbe of London. He was educated at Shrewsbury school and Trinity Hall, Cambridge, where he entered as a scholar in 1834 and graduated B.A. in 1837. He served his articles with a proctor in Doctors' Commons, and proceeded LL.B. in 1840 and LL.D. in December 1867. In 1841 Sladen emigrated to Victoria, landing on 14 Feb. 1842, and...
Another 169 words (12 lines of text) are included under the topic Early Sladen Notables in all our PDF Extended History products and printed products wherever possible.

Sladen migration to the United States +

Sladen Settlers in United States in the 19th Century