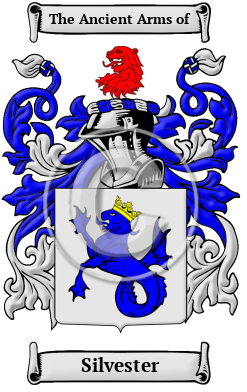 Early Origins of the Silvester family

The surname Silvester was first found in Essex, but the earliest record of the name was Sylvester, a medieval Bishop of Worcester (1216-1218.)

Early History of the Silvester family

Spelling variations of this family name include: Silvester, Sylvester, Silvestre and others.

Notable among the family at this time was Daniel Silvester, Advocate; Joshua Sylvester (1563-1618), an English poet; and John Silvester (1652-1722) an English blacksmith at the Tower of London who held the Lordship of...
Another 33 words (2 lines of text) are included under the topic Early Silvester Notables in all our PDF Extended History products and printed products wherever possible.

In the United States, the name Silvester is the 14,179th most popular surname with an estimated 2,487 people with that name. [1]

Silvester migration to the United States +

Silvester Settlers in United States in the 17th Century

Silvester Settlers in United States in the 18th Century

Silvester Settlers in United States in the 19th Century

Silvester Settlers in Australia in the 19th Century

Silvester Settlers in New Zealand in the 19th Century

Silvester Settlers in West Indies in the 17th Century

Historic Events for the Silvester family +