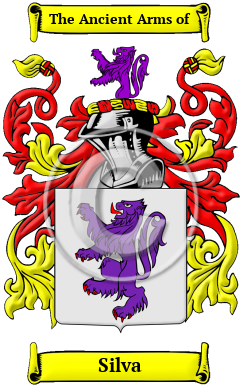 Early Origins of the Silva family

The surname Silva was first found in the town of Silva in the Portuguese province of Valenca do Minho. The name of the town is derived from the Portuguese word 'silva,' which means 'forest,' and indicating that the area was once heavily forested.

Early History of the Silva family

This web page shows only a small excerpt of our Silva research. Another 36 words (3 lines of text) covering the years 1647, 1717, 1673, 1731 and 1799 are included under the topic Early Silva History in all our PDF Extended History products and printed products wherever possible.

Prominent members of the family include Pedro da Silva (c.1647-1717), born in Lisbon and settling in New France prior to 1673, he was the first post courier in...
Another 27 words (2 lines of text) are included under the topic Early Silva Notables in all our PDF Extended History products and printed products wherever possible.

Silva migration to the United States +

Silva Settlers in United States in the 16th Century

Silva Settlers in United States in the 18th Century

Silva Settlers in United States in the 19th Century

Silva Settlers in Australia in the 19th Century

Silva Settlers in New Zealand in the 19th Century

Silva Settlers in West Indies in the 18th Century

Silva Settlers in West Indies in the 19th Century

Historic Events for the Silva family +

Suggested Readings for the name Silva +