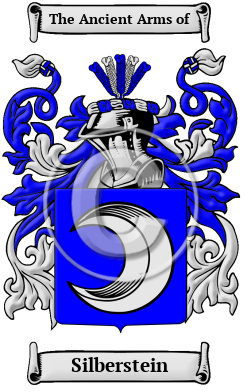 The roots of the distinguished German surname Silberstein lie in the region of Hessen. The name literally means "silver," and was most likely originally borne by a silversmith.

Early Origins of the Silberstein family

The surname Silberstein was first found in Hessen, where the name was closely identified in early mediaeval times with the feudal society which would become prominent throughout European history. The name would later emerge as a noble family with great influence, having many distinguished branches, and become noted for its involvement in social, economic and political affairs. The earliest recorded variant of the name was Silberer, borne by a resident of Esslingen in 1279.

Early History of the Silberstein family

Another 42 words (3 lines of text) are included under the topic Early Silberstein Notables in all our PDF Extended History products and printed products wherever possible.

Migration of the Silberstein family

Some of the first settlers of this family name or some of its variants were: George Silber, who came to Philadelphia in 1749; as did Tobias Silber in 1805; John Conrad Silber in 1823; and Daniel Silber in 1868. Joseph Silberman came in 1844.