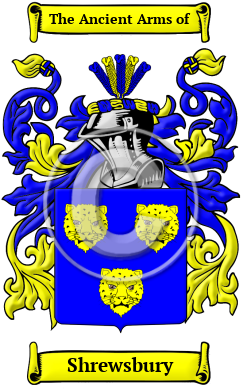 Early Origins of the Shrewsbury family

The surname Shrewsbury was first found in Shropshire where the surname is descended from the tenant of the town and lands of Shrewsbury, held by Earl Roger, a Norman Baron, who was recorded in the Domesday Book census of 1086.

One of the earliest records of the family was Robert of Shrewsbury (d. 1167), hagiologist and prior of Shrewsbury in 1137, when he was sent in search of St. Wenefred's bones. He became fifth abbot before 1160, and died in 1167.

Years later, Ralph of Shrewsbury (died 1363) was "Bishop of Bath and Wells, a doctor of theology and canon law, and keeper of the king's wardrobe, received, it is doubtfully said, a prebend of Salisbury in 1297, and was also a canon of Wells. " [1]

Early History of the Shrewsbury family

This web page shows only a small excerpt of our Shrewsbury research. Another 88 words (6 lines of text) covering the years 1280, 1379, 1332 and 1250 are included under the topic Early Shrewsbury History in all our PDF Extended History products and printed products wherever possible.

More information is included under the topic Early Shrewsbury Notables in all our PDF Extended History products and printed products wherever possible.

In the United States, the name Shrewsbury is the 16,348th most popular surname with an estimated 2,487 people with that name. [2]

Migration of the Shrewsbury family