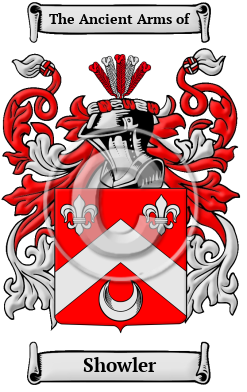 Early Origins of the Showler family

The surname Showler was first found in Hertfordshire, where the first record of the name was Aluricus Scoua who was listed in the Domesday Book. Leuuinus Scufe was listed c. 1067 in the reference "Old English Bynames" and Wulnod Scoue was listed as a Templar Knight in 1185. The name is probably derived from the Old English word "scufa," which means to "thrust, push."

The name is often metonymic for Shoveller and it's variants. In this latter case, the name is a trade name for someone who makes "shovels."

As the names are so similar phonetically, it is now difficult to clearly determine which origin is which. One branch of the family was found at Knowlton in Kent. "The mansion-house was the residence of Sir Cloudesley Shovel, to whom it came by marriage with the widow of Sir John Harborough, whose two sons were drowned with Sir Cloudesley when his vessel was wrecked off the Scilly Isles." [1]

Born John Shovell in 1650, he assumed the first name of Cloudesley from his maternal grandmother Lucy Cloudisley and rose to become Admiral of the Fleet from a cabin boy.

Early History of the Showler family

This web page shows only a small excerpt of our Showler research. Another 90 words (6 lines of text) covering the years 1301, 1609, 1703, 1777, 1650 and 1707 are included under the topic Early Showler History in all our PDF Extended History products and printed products wherever possible.

Spelling variations of this family name include: Shovel, Showl, Shovell, Shoveller, Shouler, Showler and many more.

Another 27 words (2 lines of text) are included under the topic Early Showler Notables in all our PDF Extended History products and printed products wherever possible.

Showler Settlers in Australia in the 19th Century