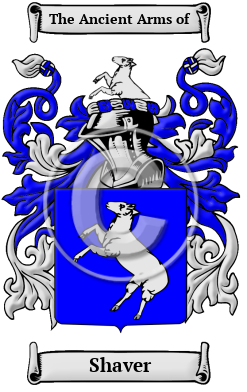 The distinguished surname Shaver is German in origin. It is derived from the Middle High German term "schaffaere," which referred to a shepherd, one who took care of sheep. [1] Alternatively, the name could have been derived from an German occupational name for someone "who made casks and barrels, a cooper." [2]

Early Origins of the Shaver family

The surname Shaver was first found in Hessen, where the name was closely identified in early medieval times with the feudal society which would become prominent throughout European history. The name would later emerge as a noble family with great influence, having many distinguished branches, and become noted for its involvement in social, economic and political affairs.

Early History of the Shaver family

Prominent figures of the time who bore the name Shaver were Peter Schöffer (c.1425-c.1503), an early German printer, and worked as a manuscript copyist in 1451. Angelus Silesius or Johann Angelus Silesius (1624-1677), born Johann Scheffler, was a German Catholic priest and physician. He was known as a mystic and religious poet, born and raised a Lutheran. In 1653, he adopted the name Angelus (Latin for "angel" or "heavenly messenger") and the epithet Silesius ("Silesian") and converted to Catholicism. As a convert and priest, he tried to convince German Protestants...
Another 89 words (6 lines of text) are included under the topic Early Shaver Notables in all our PDF Extended History products and printed products wherever possible.

In the United States, the name Shaver is the 1,742nd most popular surname with an estimated 17,409 people with that name. [3]

Shaver migration to the United States +

Shaver Settlers in United States in the 18th Century

Shaver Settlers in United States in the 19th Century

Shaver Settlers in United States in the 20th Century

Shaver Settlers in Canada in the 18th Century

Shaver Settlers in Canada in the 20th Century