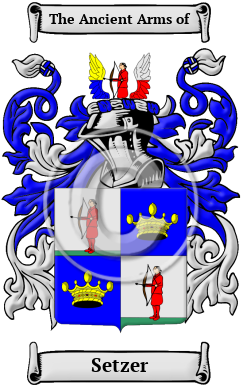 The German surname Setzer is an Upper German name with roots in the southern region of Bavaria. The name is derived from the German verb "setzen," meaning "to set," and was probably first borne by someone who worked at a market or fair, setting the prices of merchandise. The Low German variation of the name, Settegast, is even more specific, meaning "one who sets the price of barley."

Early Origins of the Setzer family

The surname Setzer was first found in Regensburg; the first recorded bearer was Ortlieb der Setzer, who lived there in 1290. The young Setzer family was instrumental during this early period, playing a major role in the development of medieval Bavarian society.

Early History of the Setzer family

This web page shows only a small excerpt of our Setzer research. Another 58 words (4 lines of text) covering the years 1373, 1480, 1532, 1813, and 1890 are included under the topic Early Setzer History in all our PDF Extended History products and printed products wherever possible.

Spelling variations of this family name include: Setzer, Sezzer, Settegast, Settgast, Setter and many more.

Another 33 words (2 lines of text) are included under the topic Early Setzer Notables in all our PDF Extended History products and printed products wherever possible.

In the United States, the name Setzer is the 6,060th most popular surname with an estimated 4,974 people with that name. [1]

Setzer migration to the United States +

Setzer Settlers in United States in the 18th Century

Setzer Settlers in United States in the 19th Century

Setzer Settlers in United States in the 20th Century