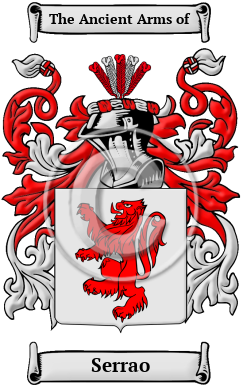 Noble surnames, such as Serrao, evoke images of the ancient homeland of the Spanish people. The original bearer of the name Serrao, which is a local surname, once lived, held land, or was born in the beautiful region of Spain. In Spain, hereditary surnames were adopted according to fairly general rules and during the late Middle Ages, names that were derived from localities became increasingly widespread. Local names originally denoted the proprietorship of the village or estate. The Serrao family originally lived near a ridge or chain of hills. The name was originally derived from the Old French word Serre, but it was recorded in medieval documents in the Latin form Serra, which means ridge.

Early Origins of the Serrao family

The surname Serrao was first found in Castile, the medieval Spanish kingdom whose language and culture were to spread to many countries of the world.

Early History of the Serrao family

This web page shows only a small excerpt of our Serrao research. Another 128 words (9 lines of text) covering the years 1274, 1420, and 1749 are included under the topic Early Serrao History in all our PDF Extended History products and printed products wherever possible.

Spelling variations of this family name include: Serrano, Serrana, Serra and others.

Notable bearers of the family name Serrao were brothers Jaime, Juan and Pedro Serra, fourteenth century painters; Juan de Serrano, prior of Guadalupe in the 1420s; friar Junípero Serra, a Franciscan originally from Mallorca who went to New Spain...
Another 39 words (3 lines of text) are included under the topic Early Serrao Notables in all our PDF Extended History products and printed products wherever possible.

Migration of the Serrao family

Some of the first settlers of this family name or some of its variants were: María Serrana, who sailed to America in 1513; Alonso Serrano, to Peru in 1534; Antonio Serrano, to Cartagena in 1535; Cristóbal Serrano came to the Americas in 1511.