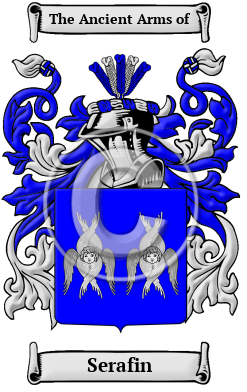 Early Origins of the Serafin family

The surname Serafin was first found in Messina (Sicilian: Missina; Latin: Messana), capital of the Italian province of Messina. Its history begins in 397 B.C. After a checkered history the Saracens took it in 831, and the Normans in 1061. It was host to the crusaders in 1190. Garibaldi landed in 1860 and it was the last city to be made a part of united Italy. In those ancient times only persons of rank, the podesta, clergy, city officials, army officers, artists, landowners were entered into the records. To be recorded at this time, at the beginning of recorded history, was of itself a great distinction and indicative of noble ancestry. The Serafini achieved great nobility in the city of Messina in the 15th century and became one of the distinguished families of the region.

Early History of the Serafin family

This web page shows only a small excerpt of our Serafin research. Another 101 words (7 lines of text) covering the years 1204, 1877, 1699 and 1776 are included under the topic Early Serafin History in all our PDF Extended History products and printed products wherever possible.

Prominent among bearers of this surname in early times was Sanctus Seraphin (1699-1776), also known as Santo Serafin, a successful Italian luthier in Venice. Today, a...
Another 26 words (2 lines of text) are included under the topic Early Serafin Notables in all our PDF Extended History products and printed products wherever possible.

In the United States, the name Serafin is the 11,453rd most popular surname with an estimated 2,487 people with that name. [1]

Migration of the Serafin family