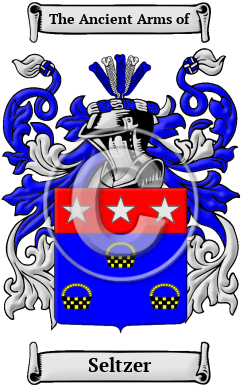 During the Middle Ages, the surname of Seltzer was used in Germany. While the patronymic and metronymic surnames, which are derived from the name of the father and mother respectively, are the most common form of a hereditary surname in Germany, occupational surnames also emerged during the late Middle Ages. Many people, such as the Seltzer family, adopted the name of their occupation as their surname. However, an occupational name did not become a hereditary surname until the office or type of employment became hereditary. The surname Seltzer was an occupational name for a person who sold or extracted salt. A variety of similar German surnames are derived from the Old German word "salt," meaning "salt."

Early Origins of the Seltzer family

The surname Seltzer was first found in the ancient province of Thuringia, where the name was closely identified in early mediaeval times with the feudal society which would become prominent throughout European history. The name would later emerge as a noble family with great influence, having many distinguished branches, and become noted for its involvement in social, economic and political affairs.

Early History of the Seltzer family

This web page shows only a small excerpt of our Seltzer research. Another 90 words (6 lines of text) covering the years 1716 and 1845 are included under the topic Early Seltzer History in all our PDF Extended History products and printed products wherever possible.

Spelling variations of this family name include: Selzer, Seltzer, Saelzer, Saeltzer, Saltzer and others.

Prominent bearers of the family name Seltzer at this time were Johann Edmund Selzer von Herbissheim, who was a lieutenant general in the Austrian army and was knighted in 1716 for his outstanding...
Another 33 words (2 lines of text) are included under the topic Early Seltzer Notables in all our PDF Extended History products and printed products wherever possible.

In the United States, the name Seltzer is the 7,792nd most popular surname with an estimated 2,487 people with that name. [1]

Seltzer migration to the United States +

Seltzer Settlers in United States in the 18th Century

Seltzer Settlers in United States in the 19th Century

Historic Events for the Seltzer family +