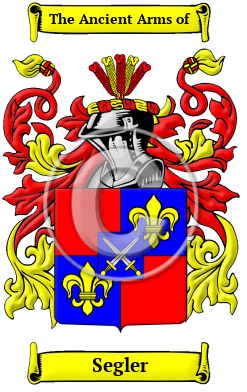 The German state of Bavariais the ancestral home of the Segler family. Hereditary surnames began to be used in Germany during the 12th century. Names like Segler, that came from the name of the job done by their initial bearer, were very popular. Segler is an occupational name for a maker or purveyor of wax seals of the type commonly used to certify the authenticity of letters and documents until early this century, or a person responsible for the sealing and signing of official documents, a position known as Siegelbeamter. The name comes from the German word "siegel," which means "seal."

Early Origins of the Segler family

The surname Segler was first found in Bavaria, where the family gained a significant reputation for its contributions to the emerging mediaeval society. The name became prominent as many branches of the family founded separate houses and acquired estates in various regions, always elevating their social status by their great contributions to society. Individual bearers of the name first mentioned in ancient chronicles include Tetmarus Sigeler of Stettin in Pomerania (c.1263,) and Sigler of Wuerzburg (c.1383). The name literally refers to the position of "Siegelbeamter," responsible for seals and the signing of documents.

Early History of the Segler family

In the medieval era, many different cultural groups lived in the German states. There are thus many regional variations of German surnames from that era. Westphalians spoke Low German, which is similar to modern Dutch. Many German names carry suffixes that identify where they came from. Others have phrases attached that identify something about the original bearer. Other variations in German names resulted from the fact that medieval scribes worked without the aid of any spelling rules. The spelling variations of the name Segler include Siegel, Sigel, Sigl, Siegl, Siegler, Sigler, Siglin, Sieglin, Siegelin, Sigelin, Siglen, Sieglen, Siegele and many more.

More information is included under the topic Early Segler Notables in all our PDF Extended History products and printed products wherever possible.

Migration of the Segler family

Thousands of German settlers came to North America between the mid-17th and mid-20th centuries. The hardships of the long voyage were balanced by the opportunity to escape poverty and religious persecution. The descendents of these settlers still populate the states of Pennsylvania, Texas, New York, Illinois, and California. Many also live in Ontario and the prairie provinces of Canada. An inquiry into the early roots of North American families has revealed a number of immigrants bearing the name Segler or a variant listed above: Jacob Siegel, who came to Pennsylvania in 1727. Johannes Siglin settled in Pennsylvania in 1753 with his wife and five children, as did John Siegel in 1765.