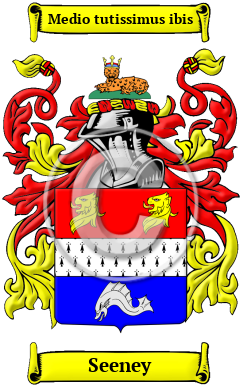 The history of the name Seeney goes back, perhaps as far as 1066, when the Norman Conquest of England occurred. Soon after this event, the name would have been given to a person with lordly bearing, or the older of two people with the same name. The first is by analogy with the French seigneur, meaning lord.

Early Origins of the Seeney family

The surname Seeney was first found in Norfolk, where the family was granted lands by William the Conqueror for having assisted at the Battle of Hastings in 1066. The earliest known bearer of the name was Walter Seignure, who was recorded in the Pipe Rolls of Norfolk in 1164.

Early History of the Seeney family

Before English spelling was institutionalized a couple of hundred years back, spelling varieties of names were a typical event. Components of Latin, Norman French and different dialects ended up noticeably fused into English all through the Middle Ages, and name spellings changed even among the proficient. The varieties of the surname Seeney include Senior, Sinyeard, Singard, Sinyard, Sinor, Sayner, Saynor, Sayner and many more.

Another 33 words (2 lines of text) are included under the topic Early Seeney Notables in all our PDF Extended History products and printed products wherever possible.

Migration of the Seeney family

In England at this time, the uncertainty of the political and religious environment of the time caused many families to board ships for distant British colonies in the hopes of finding land and opportunity, and escaping persecution. The voyages were expensive, crowded, and difficult, though, and many arrived in North America sick, starved, and destitute. Those who did make it, however, were greeted with greater opportunities and freedoms that they could have experienced at home. Many of those families went on to make important contributions to the young nations in which they settled. Early immigration records have shown some of the first Seeneys to arrive on North American shores: Eliz Senior, who settled in Virginia in 1666; Jacob Senior, who arrived in Nevis in 1679; Joseph Senior, who arrived in Barbados in 1680 with his four servants, Jane Senior, who came to Virginia in 1728.