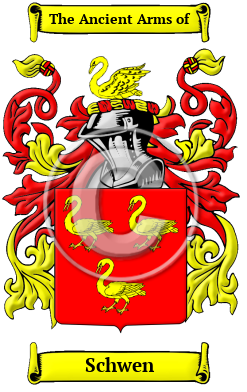 A multitude of prestigious family names, such as the surname Schwen, were formed in the lands which became the modern German state of Prussia, known for its beauty, industry and military power. However, in the medieval era, Prussia was fragmented and inhabited by numerous barbarian tribes, who fought amongst themselves for control of the land. The borders of the barbarian kingdoms, which were established after the fall of the Roman Empire, changed repeatedly. The region that came to be known as Prussia was roughly divided between the territories of Brandenburg-Prussia, West Prussia and East Prussia The Schwen family emerged in Brandenburg-Prussia, which is essentially the birthplace of modern Germany. By the 19th century, Brandenburg-Prussia had incorporated East Prussia, West Prussia and many other German territories. Moreover, in the late 19th century, it led the German states in the unification of Germany.

Early Origins of the Schwen family

The surname Schwen was first found in Mecklenburg, in the western Baltic region, where the name was closely identified in early mediaeval times, as early as 1202, with the feudal society which would become prominent throughout European history. Old Mecklenburg chronicles mention Carston von Schwan in 1202 and Heinrich von Schwan, court tutor (Hofmeister) to the Duke of Mecklenburg, in 1248. In 1413 the Knight, Carl von Schwan, accompanied the Bishop Sigismund to Camin to the historical Council of Costnitz. The name would later be associated with a noble family with great influence, having many distinguished branches in the eastern provinces of Pomerania and Meissen. They became noted for their involvement in social, economic and political affairs, giving the name Schwan to a city near the port of Rostock.

Early History of the Schwen family

In the medieval era, many different cultural groups lived in the German states. There are thus many regional variations of German surnames from that era. Westphalians spoke Low German, which is similar to modern Dutch. Many German names carry suffixes that identify where they came from. Others have phrases attached that identify something about the original bearer. Other variations in German names resulted from the fact that medieval scribes worked without the aid of any spelling rules. The spelling variations of the name Schwen include Schwan, Schwann, Schwahn and others.

Notable figures of the time with the name Schwen were Michael Schwenke (1563-1610), was a German sculptor from Pirna, Saxony. Theodor Schwann (1810-1882), who was one of the most important biologists of the 19th century, mainly because...
Another 36 words (3 lines of text) are included under the topic Early Schwen Notables in all our PDF Extended History products and printed products wherever possible.

Schwen migration to the United States +

Prussia played an extremely influential role in shaping modern German history. It remained a part of Germany until after the Second World War. Prussia was divided among the Soviet Union, Poland, East Germany and West Germany. Many Prussians became residents of these new countries after the War, and many migrated to other parts of Germany or Europe, as well as to North America. In the United States, the majority of settlers landed in Philadelphia, and moved on to Ohio, Texas, Illinois, California, New York, and Maryland. Many German settlers also migrated to Canada, particularly to Ontario and the Prairies. Amongst the settlers in North America with this distinguished name Schwen were

Schwen Settlers in United States in the 18th Century