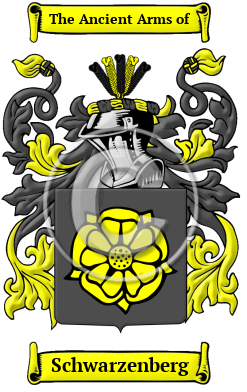 Thuringia, which is located between Hessen and Lower Saxony in the west and Saxony in the east, is the noble birthplace of the name Schwarzenberg. It is derived from the low German word "Schwarze," which means "black," or "swarthy."

Early Origins of the Schwarzenberg family

The surname Schwarzenberg was first found in the Thuringian region, where this family name became a prominent contributor to the development of the district from ancient times. Prominent in social affairs, the name became an integral part of that turbulent region as it emerged to form alliances with other families within the Feudal System. Chronicles trace the use of "Schwarz" as a name as far back as the seventh century, when two brothers, "der schwarze und der weisse Ewald," worked as missionaries in Westphalia.

Early History of the Schwarzenberg family

Spelling variations of this family name include: Schwartz, Swartz, Schwarz, Schwartze, Schwarte and others.

Notable members of the surname Schwarzenberg in this period were Martin Schwartz (died 1487), Captain of mercenaries, who was chosen leader of the band of two thousand Germans which Margaret, dowager duchess of Burgundy, sent over from the Low Countries to aid Lambert Simnel in 1487. "The little army which Schwartz commanded was joined by a number of Irish under Thomas Fitzgerald (not, as is sometimes stated, the Earl of Kildare). On 8 May Henry VII settled down to await them at Kenilworth. Schwartz and his friends...
Another 86 words (6 lines of text) are included under the topic Early Schwarzenberg Notables in all our PDF Extended History products and printed products wherever possible.

Migration of the Schwarzenberg family

Some of the first settlers of this family name or some of its variants were: Elizabeth Schwartz, who arrived in England and/or America with her four children in 1709; as did Georg Schwarz with his wife and four children. Two decades later, a wave of Schwartz members began arriving in Philadelphia: Abraham Schwartz in 1727.