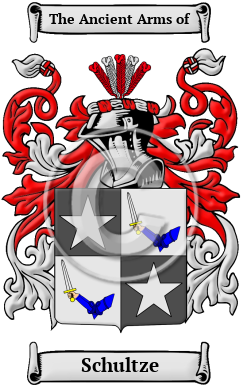 The name Schultze comes from one of those ancient dukedoms, territories and states that would eventually form a part of present day Germany. At its birth in the Middle Ages, it was used to indicate someone who worked as a town-mayor derived from the medieval name "Schultheis" which has the same meaning.

Early Origins of the Schultze family

The surname Schultze was first found in Switzerland, where branches of this estimable family were elevated to the ranks of the nobility and came to possess great political influence. The name stems from the medieval name "Schultheis" which meant "town-mayor."

Early History of the Schultze family

Notables of the time with the surname Schultze were Jerzy Georg Daniel Schultz the Younger (1615-1683), Prussian painter of the Baroque era; Johann Abraham Schultz (1747-1800), a composer and conductor of the orchestra of Prince Heinrich...
Another 35 words (2 lines of text) are included under the topic Early Schultze Notables in all our PDF Extended History products and printed products wherever possible.

Schultze migration to the United States +

Schultze Settlers in United States in the 18th Century

Schultze Settlers in United States in the 19th Century

Schultze Settlers in United States in the 20th Century

Schultze Settlers in Canada in the 18th Century

Schultze Settlers in New Zealand in the 19th Century

Historic Events for the Schultze family +