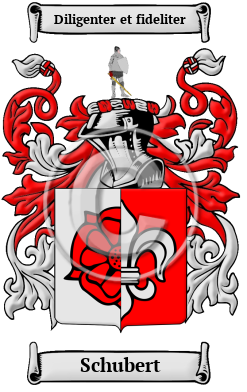 The name Schubert was born in the beautiful region of Bohemia, which is now part of Czechoslavakia. In the Middle Ages, many of the Bohemian were a part of the Holy Roman Empire, which was characterized by the Feudal System. Before this era, people were known only by a single name. However, as the population increased and travelers set out on their journeys, it became necessary for people to adopt a second name to identify themselves. Many people, such as the Schubert family, adopted the name of their feudal occupation as their surname. However, an occupational name did not become a hereditary surname until the office or type of employment became hereditary. The surname Schubert was an occupational name for a cobbler. Ancient records reveal the name Schubert is derived from the Old German words "schuoch wurhte," and the German "schuowirt," which mean "shoemaker."

Early Origins of the Schubert family

The surname Schubert was first found in Bohemia, where the name was closely identified in early mediaeval times with the feudal society which would shape the course of European history. Chronicles mention Waczlab Schubort in the town Dux in 1390, and Close Schubert in Glatz in 1415. They would later emerge as a noble family with great influence, having many distinguished branches, and become noted for their involvement in social, economic and political affairs.

Early History of the Schubert family

During this early period, notable bearers of the name Schubert included Willem Schubart von Ehrenberg (ca.1630-1676), a Flemish Baroque painter; and Christian Friedrich Daniel Schubart (1739-1791), an organist who published...
Another 30 words (2 lines of text) are included under the topic Early Schubert Notables in all our PDF Extended History products and printed products wherever possible.

In the United States, the name Schubert is the 3,415th most popular surname with an estimated 9,948 people with that name. [1]

Schubert migration to the United States +

Schubert Settlers in United States in the 18th Century

Schubert Settlers in United States in the 19th Century

Schubert Settlers in United States in the 20th Century

Schubert Settlers in Australia in the 19th Century

Schubert Settlers in New Zealand in the 19th Century

Historic Events for the Schubert family +

Suggested Readings for the name Schubert +