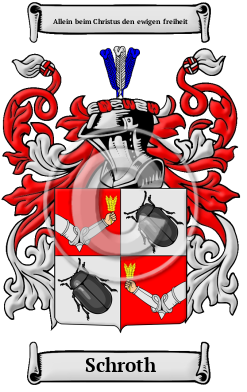 The distinguished surname Schroth emerged in the former German province of East Prussia. The name is derived from the Low German verb "schroden," meaning "cut" or "chop," and was most likely originally borne by a wood-cutter, a tailor, or a transporter of beer and wine (known in North Germany as a Shröder).

Early Origins of the Schroth family

The surname Schroth was first found in the northeastern regions of Germany, where the name was closely identified in early mediaeval times with the feudal society which would have prominent effects on the development of European history. The name would later be linked to noble families of great influence, having many distinguished branches, and becoming renowned for their involvement in social, economic and political affairs.

Early History of the Schroth family

Notables bearing the name Schroth of this period include Friedrich Ludwig Schroeder (1744-1816), actor and dramatist, who was manager of the Hamburg theater, Corona Schroeter (1751-1802), a court singer in Weimar who played the leading role opposite to Goethe in one of...
Another 41 words (3 lines of text) are included under the topic Early Schroth Notables in all our PDF Extended History products and printed products wherever possible.

In the United States, the name Schroth is the 14,768th most popular surname with an estimated 2,487 people with that name. [1]

Schroth migration to the United States +

Schroth Settlers in United States in the 18th Century

Schroth Settlers in United States in the 19th Century

Schroth Settlers in United States in the 20th Century